Accessalator is a design project for the Discovery and Invention class at Georgia Institute of Technology. Our team focused on escalators as transitional spaces .Escalators are spaces and/or pathways that are both shared and individual. We focused on escalators within transit stations.  People use them to not only move between places but also situations, as from home to work, or a site of limitations to a site of possibilities. As a team, we imagined projections within the contexts of four MARTA stations, three nearby in Midtown and one in Doraville at one suburban end of a rail line. Because they are shared by the collective and experienced individually, it is important to engage many stories. 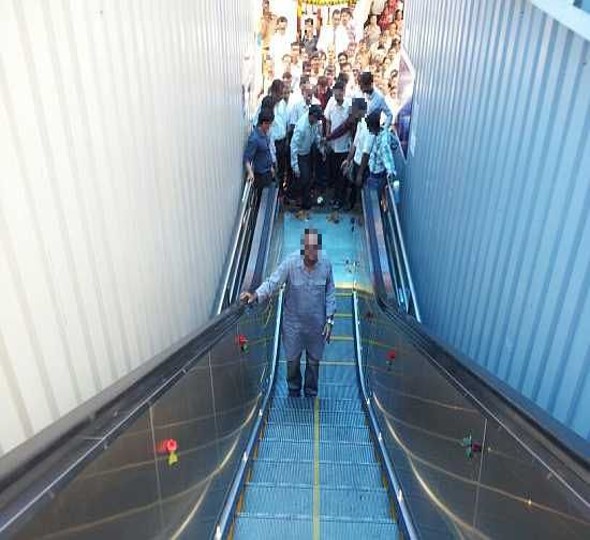 This was the first escalator at a local Western Railway station in Mumbai. It was opened in 2013, built at an estimated cost of 6 million INR, or around 85000 USD. It is Mumbai’s second escalator in a suburban train station(after an escalator at a Central Railway station). We know that escalators are pathways for both individual and shared experiences…. 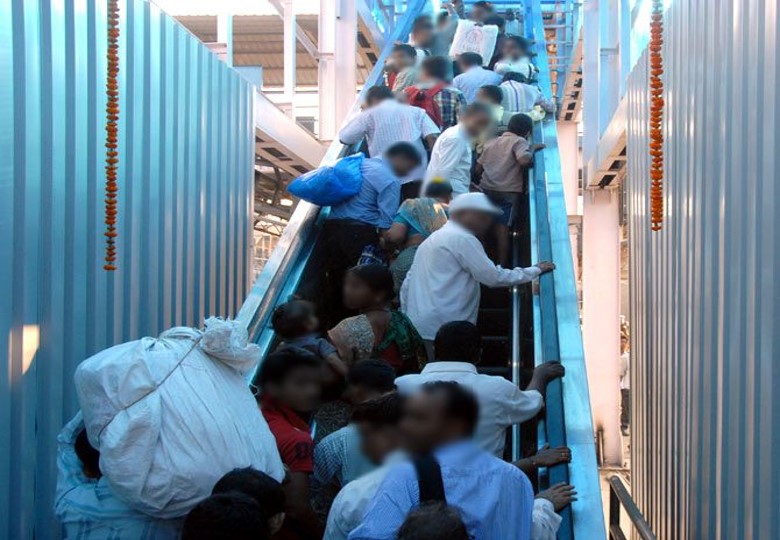 ….but sometimes, there can be too much sharing. And this is not even the limit. Sometimes, it got more crowded than this. Here, it’s just one person with a big bag on their shoulder. Suddenly, the estimated turnout it was created for(9000 commuters per hour) seems too small.

Speaking about my own story- I have spent 4 years using this escalator, as part of my commute to my undergrad University. It’s funny how everyone, including me, preferred using the heavily crowded escalator, over the (slightly less crowded and wider) staircase on the other side, which would have been relatively safer. Using this escalator so frequently desensitized me towards them. However, having seen several, often unwelcome, forwarded videos about escalator incidents, I feel that maybe I should have been more careful.

We looked at a Japanese escalator that provides for wheelchair accessibility.

When we enter transitional spaces, what do we leave behind? Certainly there is some kind of trace.We wanted to explore this by projecting handprints onto the sides of the escalators. The idea is that a projector equipped with motion sensors will detect peoples’ hands as they touch different surfaces on the escalator and generate a colored handprint where they touched. These prints persist throughout the day, letting others know that there were people who once here. People of all sizes, shapes, and colors.

Hands are a very public part of our bodies. They are used to interact and connect with the people and the world around us. When we interact with a space, we leave things behind that we cannot always keep track of. Here, hands on the escalator are detected using touch sensors. A projector above generates a hand of the same size and a random color in that exact spot so that people can whose been there and join the path with them.

Silhouettes of people riding the escalator inside the North Avenue station are doubled, as in binocular vision, and projected onto the wall outside the station. This might become stills taken at regular intervals, and projected after a timed delay.

Same thing, at night. Colors should change, possibly with each shift of silhouettes.

We want to know people’s experiences with escalators so that we could project them for others to see. This is Christina’s story about how she likes to race people who are taking the escalator while she takes the stairs. We are choosing comics as a medium since they are a simple and accessible format that people could appreciate.

We intended for the pages of the comic to be projected on the adjacent walls of the escalator. Since a real person’s story is being featured, this extends the idea of a shared path from being not only a physical space but also an emotional space.

We wanted to create an atmospheric projection which enhanced traveller’s experience of the station and escalator. Everyone is navigating the current together and trying to get where they need to go. Their time is shared temporarily, but it is still shared all the same. This is a means of creating different interactions between the escalator and the users. Different evocative phrases, sentences, words, or poems can be projected onto the side of the escalator. Different languages can be featured too. 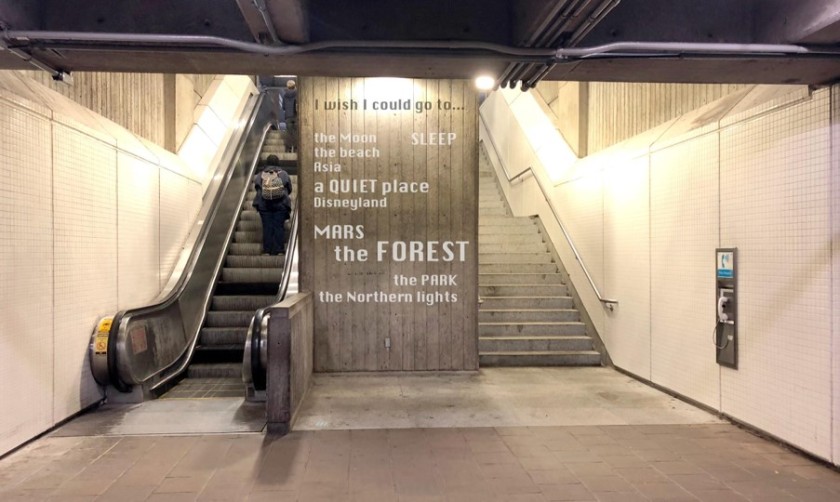 As people enter the escalator they write responses to the prompt that they then submit at the end of their ride in a collection box. Responses are digitized and then projected into the more open space adjacent to  the escalator.

Because transit stations are public infrastructures for mobility, they are a mode of transition. We propose using projections in and around escalators in MARTA stations as a way to acknowledge that they are spaces and pathways that are both shared and individual.